Best time to visit Greece is between late April and early November when the weather is warm. The hottest month is July and August, which suitable for sunbathing. For comfortable sightseeing and moderate temperatures from March to May or October to early December are the best. It’s pretty obvious we choose to come in October to avoid the crowd and warm temperatures.

Luckily for us Singapore Airlines low-cost airline, Scoot, has flights between Kuala Lumpur and Athens at the best value for money! We booked the tickets 10 days before departure date and we’ve got one-way flight ticket at RM764 only per person!

Fly with Scoot was one of the best experience!. For those who wonder what is Scoot Airlines? Scoot, is a Singaporean low-cost airline owned by Singapore Airlines through its subsidiary Budget Aviation Holdings. Initially, Scoot’s fleet consisted of Boeing 777 aircraft obtained from Singapore Airlines. The airline began to transition its fleet to Boeing 787 Dreamliner aircraft from 2015. Route from Singapore to Athens was launched in 2017. By the way, Scoot fly to two Europe’s destination; Athens and Berlin fly 4 times a week.

After having a great experience with Scoot airline, I wanna share some useful notes that will help you with some steps – facts of  how to book with Scoot easily:

– Want to escape the ordinary? Find out the Scoot’s destinations here!

– Would you like to travel with maximum comfort at a minimal price? Max Your Space here!

– Do you know what is the hippest place to eat at 35,000 feet? Discover Scoot Cafe menu! Don’t forget to request Halal option for Muslim.

– In the mood for some retail therapy? You’ve come to the right place! Check out the en vogue items in Scoot’s latest issue of Scoot catalogue!

– Do you love being socially connected while travelling? Enjoy inflight Wi-Fi connectivity when flying on Scoot’s fleet of Boeing 787 Dreamliners. They also have in-seat power outlets, so you can take non-stop selfies without having to worry about running out of battery juice.

– Always wanted to watch movies but never found the time to do so?
Watch it on ScooTV now!

– Would you like to become a frequent flyer programme for Singapore Airlines Group? Start collecting KrisFlyer Miles!

– Don’t wanna miss the great airfare deals? Become a Scoot insider to get a notification via email for the best cheap flights from Kuala Lumpur to Europe (Athens or Berlin).

Not to forget, Scoot gives cabin bag allowance 10kg ( limited to 2 pieces including a laptop or handbag with combined weight).

A day in Athens

Spent only 1 day in Athens wasn’t that bad after all. We decided not to stay overnight in Athens because we can’t get cheap airfare from Ryanair for the next day departure, besides we want to spend more days in Santorini so we take next flight to Santorini at night after spending daytime in Athens.

We departed from KLIA at 10:40pm and departure from Changi Airport at 2:40am local time and arrived Athens at 9:04am. The total journey was about 13Hours+. Not very tiring since the airplane was quite comfortable, its a dreamliner aircraft.

We bought a local simcard at €12.50 for 5 gb data from Vodafone vendor at the arrival hall. It’s enough for 5 day uses in Athens & Santorini. We also use baggage counter service, “Care4bag” to store our luggage for a day. It is located at Athens International Airport Departures Hall, next to Gate 2 & 3 and at Arrivals Hall next to Gate 1. Care4Bag is operate 24 hours in Athens International Airport. Check the updated price list here.

How to get to Athens City?

Getting to/from the Athens International Airport and the city center, where located about 20 km away can be reached via bus or metro train.

EXPRESS Bus routes connect directly the Athens (city center & greater area). Service is provided on a non-stop basis seven days a week including holidays (24/7 operation). All buses bound from Airport to City centre depart from the Arrivals Level ( just outside of arrival hall). BUS tickets are sold at the info/ticket-kiosk located outside the Arrivals between Exits 4 and 5. Take bus X95 will connect you to/from Syntagma Square (Athens city center.) – Airport. One-way travel time estimation is about 1 hour and the fare per adult was €12 and can be use 2-way travel within 9 hours uses. Which mean, you can use the same ticket to go back to Airport on the same day.

Places we visit in Athens

There are a lot to see & do in Athens. Since we only reached the city almost noon time, we managed to visit Plaka, The Acropolis (and its North and South Slopes) & Syntagma Square.

The Plaka is the oldest section of Athens. Most of the streets have been closed to automobile traffic, though you should still keep a watchful eye for a speeding motorcycle or delivery truck. 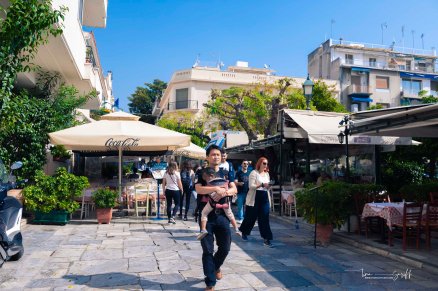 The most enjoyable moment in Plaka was having a great moment admiring the well-preserved old mansions and old shops. A walk around the old neighborhoods reveals the coexistence of different eras in cities’ heart. Luxurious department stores and small intimate shops, fancy restaurants and traditional taverns are located one next to another. You can get your souvenirs from small shops along the streets.

You should have a few enjoyable evenings in one of the restaurant in Plaka. Whenever you passing by at any restaurant, the usherette will start promoting their menus. If you wish to have at another place, just politely say no to them.

02. The Acropolis of Athens

The Acropolis is the one historical site you can’t miss. You can wander up there yourself but advisable to go early or later in the day, it can get very hot up there in the afternoon. From the Plaka and Monastiraki side it has always been a car-less, enjoyable walk and all you have to do is walk uphill from wherever you are and when you get to the top.

Get your tickets at the entrance. There are 2 entrances to the Acropolis, and when i reached to the first entrance (near the Acropoli Metro Station) the queues was very long, we ended up waiting for exactly 20 minutes at the Acropoli metro station entrance. Well not bad for us although have to stand under the hot sun. You can either avoid these queues by taking a guided tour or buy a skip-the-line ticket.

Ticket price and tips for the Acropolis and other ancient sites in Athens;

– From 1 april to 31 october, summer season tickets cost at €20 per adult. Entry to the Acropolis and its North and South Slopes.

– Combination ticket or Multi-site at €30 per adult all year round (there’s no discount during winter season). This ticket-holders get entry to the Acropolis (the Parthenon and the Erechtheion) with its North and South Slopes, as well as some of the other main archeology sites in Athens (such as Hadrian’s Library, the Ancient Agora, the Roman Agora, Archeological Site of Lykeion).

– 50% discount applied for Students of Universities from non-EU countries.

– However, anyone can enter for free during designated Open Days. These days are:

6. The first Sunday of each month from 1st November to 31st March

– Guided Tour for €39 per adult, this ticket includes entry to the Acropolis, allows you to skip any queues. A 30 minute introductory talk by a local guide, after that enjoy the archeological sites.

Note: If you have more time in Athens, its recommended to buy combined tickets.

While most visitors to the Acropolis head straight for the top, there is much more to see on the North and South slopes of the Acropolis. Follow the arrow it will lead you to well preserved Theatre of Dionysus and the Odeon of Herodes Atticus, both slopes have a number of sanctuaries, churches and sacred caves. Afterwards, you can slowly walk up to the majestic entrance to the Acropolis, Propylaia. You will see the most sacred site of the Ancient World, The Parthenon after going through the Propylaia.

This ancient theater is named after Herodes Atticus of Marathon, who built it in memory of his wife, Regilla in AD 161. The theater was designed with an auditorium fitted into a natural hollow. Semi-circular rows of seating which can accommodate nearly 5 thousands people. The orchestra was originally located in the circular space in the center with the low stage and live performances are still held at this theater during the summer time.

An ordinary entrance gate would not suffice for the glorious ancient city of the Acropolis. This majestic entranceway set the tone for arriving visitors, preparing them for the jaw-dropping site of the Parthenon and the other monumental temples on the rocky hilltop above. The Propylaia was built by Mnesikles in 437 BC to 432 BC.

Standing majestically on the highest point of the Acropolis hilltop, this breathtaking temple was the most magnificent temple of the ancient world. The temple was built from 447 BC to 338 BC during Pericles’ construction boom and is a masterpiece of the architect Iktinos and the great sculptor Phidias. Come early if you want to beat the crowd. 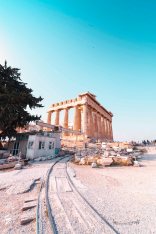 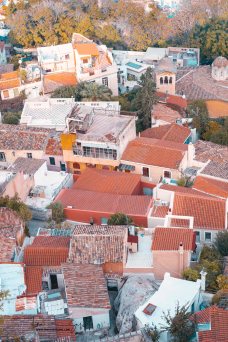 Syntagma Square is the most central square in Athens. It is an emblematic square, whose name refers to the Constitution. In the past centuries, the Athenians demanded by the King to have their rights written in a Constitution. Nowadays, there is no King and the Palace has been replaced by the Greek Parliament. This is an iconic building in the center of Athens, to say the least. In front of the Parliament, there are Guards protecting what is most valuable in a Democracy. And these Guards remain intact, no matter how many years have changed.

Admiring the Changing of Guard. The Changing of the Guards is one of the major attractions in the heart of Athens. There are soldiers who have been dressed in the traditional suits of Greek fighters of freedom, guarding the exterior parts of the Greek Parliament. They stand still, with their great clothes and their armor. Every hour, there is the Changing of the Guards following an amazing ritual that is worth admiring at least once during your visit in Athens.

For your info, we visited all those places by foot, then take a same bus to Airport for next destination, Santorini.